I wish all developers that release libraries for the JVM platform (Java, Scala and other libraries) and put their libraries on Maven repos would also put the sources there. It makes it so much easier to get sources automatically attached in an IDE without going digging for them. Maven doesn’t do this by default, but building (and deploying) the sources Jar along with the binary Jar should be a matter of adding these settings to your library’s POM (or better yet, to a parent POM if you use a parent which defines commons settings).

P2 has surely seen a lot of improvement in Eclipse 3.5, but some functionality that was actually somewhat acceptable in the old Update Manager is still lacking awesomeness. I’m trying to install VE into Galileo (Eclipse for Java + M2Eclipse + Subclipse + Scala IDE).

There are two usability issues with this. The first is that after selecting the “Visual Editor” feature from the site, I don’t have a “select dependencies” option. But from past usage of VE I remember that it requires Java EMF Model. So I select that too. A new user would not know to select this. I’ll have to navigate to the next page to find out if there are unresolved dependencies. And then we come to the second problem, which is this screen:

Am I really supposed to decipher this text and take action based on that? No thanks, I’ll just skip installing VE this time, I don’t have actual need for it right now.

ScalaBox2D is going to get an SVG scene importer soon. This will let you draw a scene in Inkscape and load it as a Box2D world in ScalaBox2D. I already pushed a very basic version of this to GitHub. It uses Slick‘s SVG parser and has many limitations as of now, but you can already draw a Scene like this:

And bring it to life in a ScalaBox2D application: 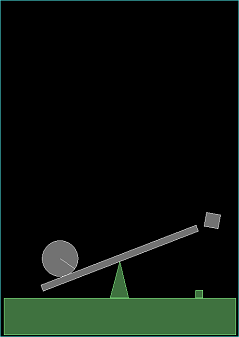 Currently every circle, box or polygon that has a red (#ff0000) fill will be turned into a dynamic body, the rest will be static bodies. There are also some limitations to the shapes, including: polygons must be convex, and have at most 8 vertices (or they’ll become static edges). Ellipses/arcs are not supported, only circles. You may get exceptions when loading some shapes.

The goal right now is to make this as robust as possible, so you can run the ScalaBox2D testbed and load (almost) any SVG file saved by Inkscape into it. After that, I’ll add support for loading scenes from game code and tying the physical bodies to game objects.